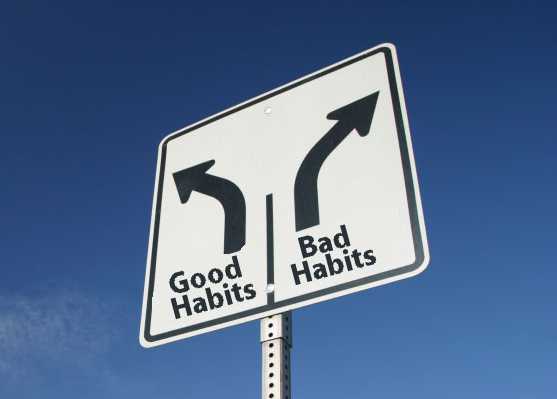 The habits are the most powerful thing in the game of self improvement. When it comes to changing habits it’s logical to do so in the beginning of the game, in order to benefit most out of it.

But we, as creatures of comfort, are rarely trying to change our habits, because they define us in a way, and going against that definition we already set is usually very hard. Usually very hard, remember that.

Having a habit of any kind means that we are used to do things a certain way, thus changing the habit means changing the way we operate. That alone is the reason why people dread changing habits.

I mean who wants to abandon the comfort of the already familiar, and take a leap by doing something that goes against what he considers his comfort zone? And more often than not that’s really the case.

You see, forming a habit means that you should stick to whatever you do, and do that consistently. Then the body, the mind, your whole character, adopts the new habit, and gets used to it.

But the process of changing habits is usually harder because it involves ditching an old habit, and replacing it by forging a new one, better one, that will take its place.

“We are what we repeatedly do. Excellence then, is not an act, but a habit.” – Aristotle

A friend of mine said that self-discipline is created by an act of habit, not an act of willpower.

That alone sums it up that on the long run the habits are the ones that determine our score in the game of self improvement, rather than intention.

Analyzing which habits to let go

Try and think about what wastes your time without giving you any results. Or even worse, making you degenerate, rather than progress. These can usually be things like staying up late, eating unhealthy foods, siting more in front of the TV at the expense of not doing any physical activity whatsoever; even things like biting your nails, smoking, things like spending way too much time on Facebook, not going out etc.

We know that our subconscious is sometimes controlling our actions, but the thing our subconscious doesn’t know is that immediate pleasure is not as good as long term success. Therefore we are keen to repeating whatever bad habits we have, enjoying the short, immediate satisfaction, and in the same time not allowing, or delaying our actions that indicate long term success.

“A change in bad habits leads to a change in life.” ~ Jenny Craig

Once you see the one you want eliminated, try and force yourself not to repeat that same habit from here on now. You noticed me saying force; well, the thing is, if you want to abandon a habit you will have to go against yourself for a while, because you are already used to it, and quitting that habit may be hard for a while.

Immediately form a new one

Here is the trick though. Replacing a bad habit with another that is deliberately added, makes the whole process quite easier. Therefore changing habits involves you adopting a brand new one instead the one you just ditched.

But before you do this think carefully about what you want to gain from the new habit, and only implement it in your life consciously, knowing the effect it will have.

Forming the new habit can be demanding for anyone, especially if the habit involves going against what appears comfortable for us.

Think about waking up early. This habit for example gives you a lot in terms of personal growth, but it is very hard to acquire, and even obtain in the beginning.

I, for example had quite a trouble making this my habit, and tweaked and refined every aspect of it in order to make it more sustainable. I would go to bed earlier at night, never take afternoons for a sleep, wear myself down during the day in order to be able to fall asleep earlier.

As you see, this habit is harder to acquire, because of the whole complexity it requires to make it possible. And there are many others that are just the same, some even harder. But with time it gets easier, and after a while a second nature even.

That’s the good thing about habits – you make activities that seam hard to others, just a routine for you.

Changing habits is good, but what about adding new ones?

Changing the habits is a sign that you diagnosed what you do wrong, and what makes you slower in moving towards progress. Replacing a habit with a new one also means that you know exactly what you want to gain, and make the effort by following the right path.

But what about making a habit without the necessity of quitting another?

If you think carefully about waking up early for example, you will come to realize that it is not necessarily replacement of another habit. Yes sure, if you were staying up late and getting up late then it can serve as replacement of a bad habit, but more often than not it’s a brand new one.

You see, there are habits that you will acquire, that are just an addition, rather than a replacement in your life. And such habits are possible only when you start seeing past the ones you have, label them as good or bad, try fixing them, or erase them from your life completely. Only then you will have the “eye” for forming new habits regardless whether they are a replacement, or simply an addition.

Changing habits is never an easy thing to do, and giving it a thought may change the way you do things in life, hence your life completely.

If you take and examine the lives of great and successful people, you will come to realize that they are only a little bit more than a set of good habits acquired over time.

Abandon the habits that make you worse, adopt the ones that improve your life on the long run.

I will leave you with a quote from Robin Sharma that I constantly use, which perfectly explains what habits mean, and what they can do to your life.

“Because the moment you stop doing the very things that got you to the top of the mountain is the very moment you begin the slid down to the valley.”