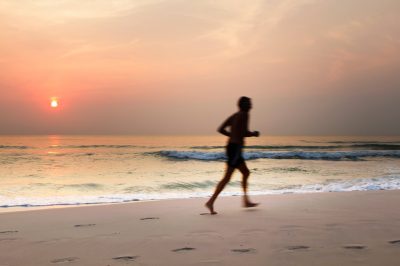 Jogging is really just a fancy word for a form of running, consisting of slowly and steadily focusing on maintaining a similar rhythm during longer distances, with intentions on building up stamina and resistance, while also a highly effective way of burning calories and to some extent losing weight, among the whole other number of positive stuff.

The benefits of jogging and its role and in one’s quest for a healthy lifestyle along with the eternal question “How to be healthy“, was rapidly popularized during the second half of the last century, probably as a counterweight against the almost parallel increase of the obesity rates in the world’s most developed countries.

So, the running i.e. jogging from a second nature of the earliest humans, crucial for their survival, through the ancient world and the mythical runner Pheidippides considered as a father of the marathon, through the middle ages, to this modern time, descended to a level where people have to constantly explain the benefits of jogging as one of the simplest, natural, elementary form of exercise. Isn’t that just downright sad…

But the cool thing is: it’s never really too late for you to engage in this fun activity. Although with aging the bone structure and the bone connecting ligaments lose their strength and flexibility, the jogging as a light exercise for maintaining the form and the fitness, is not only totally safe, but also recommended. Of course, with considerably lower intensity and duration.

As for the others, younger ones, there is just no excuse for you not doing it already.
Why? Well, let’s see:

The benefits of jogging

Sheer satisfaction of doing a favor to your body.

Burning a lot of calories and possibly losing weight.

Building up your stamina and resistance level while also toning the muscles.

As a cardio work out.

Unfortunately, nothing is perfect, (apparently :|), so you should also take a look on the few potential bad things.

Fortunately, one can always take some recommended precautionary measures in order to put the risk of injuries to the minimum. Which are they? Read along.

Minimizing the chance of any injury:

And that’s about it. The first couple of weeks can be the most difficult, feeling somewhat uncomfortable that period, while the brain and the body are still accustoming to the new routine. The best thing you can do is to take somebody with you, jogging with someone else is so much funnier than jogging alone.

Although, there are certainly a bunch of people who prefer jogging alone, listening to music or some motivational speech on their phones or iPods… In the end, it doesn’t really matter, whatever rocks your boat. The benefits of jogging are just too valuable to simply be ignored.

And remember, it’s not just an opportunity for a healthy lifestyle, it’s an obligation towards your body, ergo yourself.

Have you been jogging before? How do you feel after it ?
Share your opinion with us in the comments below.