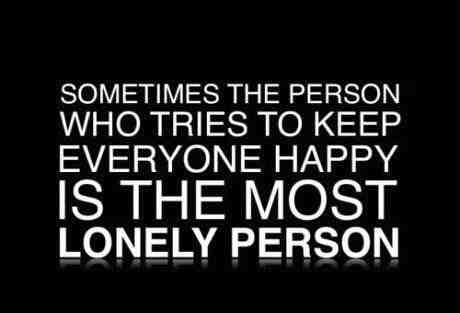 Have you ever felt that you need to be polite even though the ones around you are quite rude, and don’t deserve such a nice treatment from you ?

Have you ever smiled while the you actually just wanted to swear? Or have you ever said something nice to someone, while you would feel better hitting him?

You see, in many situations in life we are trying to be nice. But sometimes being nice is not the appropriate option. Sometimes there is such a thing as being too nice.

Many people think that being nice is something more of an unquestionable trait or quality. So we are taught from our early age to be nice to people, and even to block our true feelings while being nice.

And then a strange thing occurs with some of us, we are actually suppressing our true feelings, and our true nature, just in order to please the ones around us, exactly as we were being taught while being children.

Always being nice – Is it healthy to always act nice?

Yes, putting an act – because that’s what this is. And to answer the question shortly: No. Often times we are being described as impulsive, and realizing that this is a part of our nature, the logic dictates diversity in our behavior.

Therefore, being nice in every situation is disrupting our true nature by forming a pattern – one that shouldn’t be there at the first place.

So is this healthy just a bit? Not even by a long-shot. Suppressing your emotions from coming at the surface can cause you a whole wide panel of emotional problems, and even a severe blow to your whole personality.

I had a client once who was trying to lose weight. She’s been on a number of diets throughout the last couple of years, but had nothing produced the desirable results. We decided to go with the hard boiled egg diet, but that meant very little to no carbs throughout the entire day. The diet is not at all restrictive when it comes ti food variety and quantity, but the lack of carbs can bring anyone at the edge of their wits.

The problem, with my client, was that she’d always been nice to other people, and when the frustration kicked in from the lack of carbs in her nutritional program, she went through a very difficult time. After following my advice to speak her mind and allow herself to be capricious if need be, the frustration became less potent, and eventually fade off.

Why are we doing it then?

If you are guessing something about the society, you are quite correct. You see, the pressure we are sometimes feeling from society, and the expectations as well, can make us put this act of always being nice.

But the thing that triggers such behavior the most lies within us more than anywhere else. Even from early age we were being taught to deal in absolutes, and tried to fit only in categories described by totally opposite adjectives. We were good or bad, lazy or hard working, smart or stupid.

The biggest reason, I assume, is being too modest. Not being able to embrace our qualities, to realize that we are actually good in something.

And this is a false modesty not to be mistaken. Because rendering yourself from your qualities just so you don’t stand out from the crowd is one of the things responsible for you being too nice.

You see, sometimes we don’t want to separate ourselves from the rest, and being accepted always gives us that cocoon where we stay untouched by critics while never leaving the mediocre.

And to further help ourselves in doing so, we never speak our minds loudly, especially in times when we have to disagree, or even worst, put boundaries by telling the truth.

It’s not like we are lying through the teeth, but we are certainly lying to ourselves in a very dangerous way to an extent.

So we are distorting the picture of ourselves, one thing leads to another, and the next thing you know is having problems with your confidence, self-esteem etc.

How to recognize if you are actually falling under this category?

Quite easy actually. You just have to reminisce about many situations in which you might have probably acted this way.

So here are a couple of questions which will help you:

This list of questions can go on and on and you will just see how much you are making compromise if you are always being too nice. But even with these five questions you can discover a great deal about yourself.

How to avoid being nice in every situation, and what are the benefits from it?

This is normal. Healthy, even. Because sometimes it’s the only way you can draw a line and keep your integrity, self-esteem, decency, and the complete picture you have of yourself.

First of all try and recognize your qualities. Abandon modesty for an instance, and reform the picture you have for yourself.

Then think about what are the things that bother you, but you were never able to label them, point them with a finger. Once you are done speak your mind. And don’t be afraid of other people’s opinion. Forget about others for an instance and think about yourself.

You will be amazed how things will turn out for you. All of the sudden you will gain more respect not only in the eyes of others, but what’s more important in your eyes too.

You will have a more solid understanding of yourself, and this will render you from things like doubt, fear of not being accepted, distorted view of who you are – because these things are the ones associated with always being too nice.

Being nice is a trait for sure, don’t make a mistake on that. But not being able to recognize the situation and always acting nice is something that will have a terrible impact upon your personality, and your whole being in general.

Not to mention that you will be undermining yourself in front of others and, what is even worse, in front of yourself.

Start to perceive yourself differently, and start acting upon how you feel. You will feel whatever pressure you previously had lifted from you, and you will no longer feel, or be restrained.

What have you to say about being too nice? Have you caught yourself not being able to say NO in many occasions? How this affects you and have you found the solution to it yet?